I saw small cracks appearing in our relationship, but assumed they were shallow, containable, and typical of those any couple would accumulate over six years. It was only after the ambush proposal that I realized the tiny cracks had turned into a network—not unlike what's happened to my windshield since yesterday.

If I were the superstitious type, I'd be plenty worried right now.

I could have taken the car to the dealership, which is closer to work, but there was something I liked about Vera. Her voice was reassuring, and her eyes twinkled, even when she was giving me a warning.

Today, her silver hair is held back with an elaborate barrette. Turquoise stones dangle from her ear lobes, and a string of matching beads circles her neck, over a simple white T-shirt and fuzzy grey cardigan. She seems like a free spirit. The opposite of square.

The customer before me leaves, and Vera looks up and beckons. “The cracks have spread,” she says.

It's a statement, not a question. I peer through the window at the Lexus parked out front, and ask, “Someone's already looked at it?”

She shakes her head. “I could tell from your expression.”

“That's a hangover,” I say, reaching for the rest of my coffee and swallowing it. “But yeah, there are a few more cracks.”

“Nothing. I just drove it to work and left it in the parking garage overnight.”

She smiles. “I mean, to give you a hangover on a Tuesday. And Valentine's Day, at that.”

My eyes widen. In all that's happened, I'd forgotten Valentine's Day. I don't even have a gift for Noah yet. I'll have to scrounge something up in the mall at lunch hour and hope he'll accept it.

“Sit.” Vera gestures to a chair to the left of the counter. “Jimmy'll look at your car while you have another coffee.” She refills my cup, and waits for me to speak.

My words start slowly, building to an uncharacteristic rush, especially given that the audience is a complete stranger who's wearing far too much turquoise. I tell her everything, making no excuses for myself.

“If Baxter saw Dylan kiss me, I'm screwed,” I finish. “I wish there was something like Wonder Glass for real life.”

“I'm more worried about your boyfriend,” Vera says. “He sounds like a great guy.”

“He is, but that proposal in front of my family and friends was emotional blackmail. He was backing me into a corner.”

“People do things like that when they feel powerless in a relationship.”

I stare at her. “He's not powerless.”

She shrugs. “Sounds to me like you've been calling all the shots. And he's hurt.”

“He's known how important my career is to me since the very beginning.”

Vera opens her mouth to say something, but stops when a guy in blue coveralls appears in a doorway behind her. She steps back to meet him, and as they chat, I check my e-mail. Nothing. Not even the usual “top priority” list from Reuben. After last night, it must be a slow start for everyone.

Vera turns back to me. “Okay, there's good news and bad news. Which do you want first?” She chuckles. “Wait, I know you want the bad news first. You go through life expecting it.”

I scowl at her. “You sound like my brothers. But yeah, hit me.”

“Your tiny chip has turned into a wicked web of cracks. Wonder Glass can only do so much, and there's a forty per cent chance your windshield is too far gone to be salvaged.”

I sigh. “Why not replace the whole thing straight off?”

“Because sixty per cent is worth a try, no? Do you always give up so easily?”

“It's just a windshield.”

“It's more than that,” she says. “I'll put Jimmy to work on your car right away, but it takes 24 hours to cure. Call me later for an update.”

I get to my feet and she grabs my arm. There are chunky silver rings on every finger, and long nails with deep blue polish. “Not so fast.” Reaching under the counter with her other hand, she sets a small glass vial on the counter. It holds a couple of ounces of clear liquid and is plugged with a dropper.

She gives me a conspiratorial smile. “Special take-out formula. Seals up the cracks in real life.”

“Like magic,” I say, trying not to roll my eyes. Although she seems nice enough, she must be a huckster, preying on the stupid, selfish and lovelorn, like me.

“Yes, magic,” she says. “A drop in the right place really can do wonders. It's completely non-toxic and safe for both internal and external use. Best hundred bucks you'll ever spend.”

I shake my head. “I don't believe in magic. I believe in facing up to my mistakes and trying to fix them.”

“There's no avoiding accountability completely, but Wonder Glass gives you a short cut.” She gives my arm a squeeze. “You seem to try hard to do the right thing, Ellie. Why not give yourself a break?”

My breath catches in my throat. I do try hard to do the right thing. There just hasn't been much payoff. “A hundred bucks for hope?” I say. 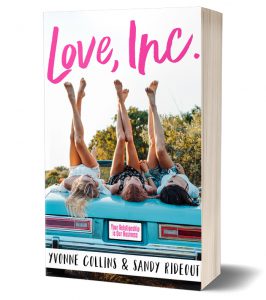